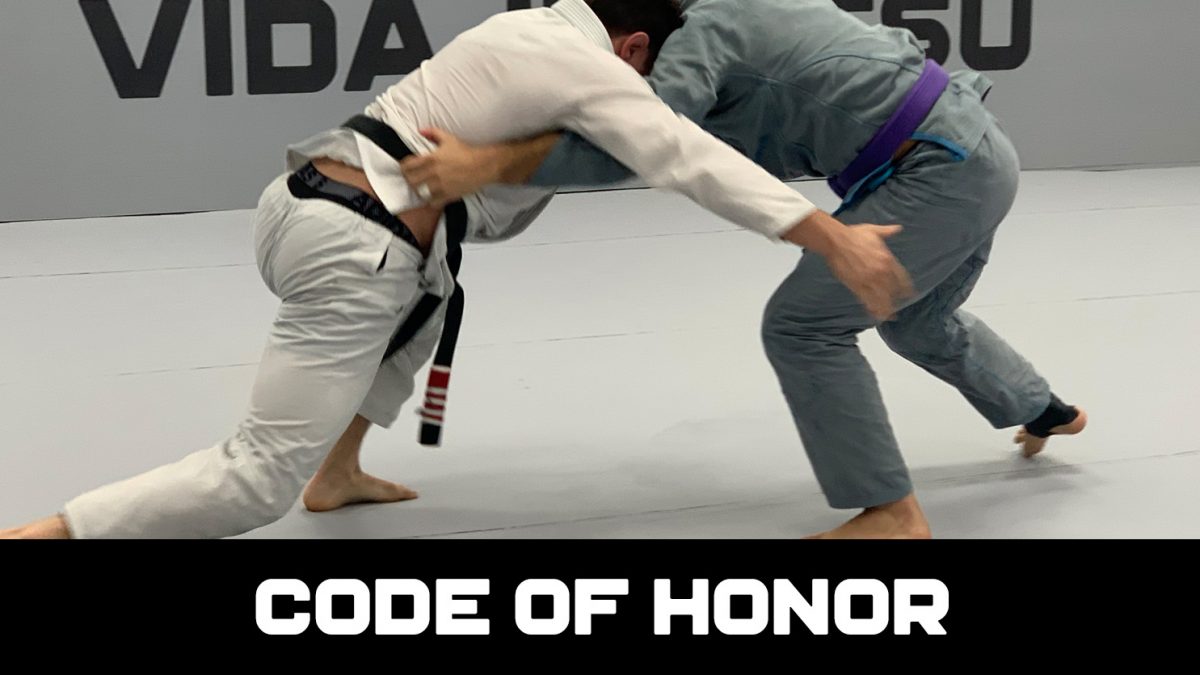 Let me preface this ramble with: I am not a black belt. I am a 41-year-old, past his prime purple belt. With that being said, most would agree that I am not your average, washed up, 41-year-old purple belt. I’ve lived a life in Law Enforcement and Government Special Operations, I am extremely fit for my age and I train under some of the most monstrous Professors and teammates around.

The mat is an interesting petri dish of personalities, intensities, respect, honor and humility. What are the rules of the mat? Sometimes they’re clear and others not so clear. This is my take—maybe not the correct one—but what I feel is the ultimate blend of hard rolling, respect and willingness to eat some humble pie.

First date: you go visit another gym. All standard formalities are important, i.e. call the Professor ahead of time, show up early, ask about gi/gym policies, bring a white gi, be ultimately humble and respectful. Remember, you are a guest dining around a table of sharks.

However, I want to focus more on the rolling/sparring aspect of things. If you’re slapping and bumping into every roll with the ultimate goal of tapping your partner, your head is in the wrong place already. Go into each and every roll for the enjoyment and learning of the roll. I’m not saying don’t try and submit your opponent, but there’s a fine line.

Gauge your intensity and pressure based on the size and experience of your partner. This is usually pretty straightforward when a higher belt is rolling with a lower belt, but what happens when it’s your equal or even a higher rank? Like a first date, go easy at first. Be polite. I didn’t say, “Don’t be technical,” but you don’t need to be grosso with smashing knee slices and crushing knee on belly pressure. Slap, bump and give up position, see if you can work out of it. Let your partner from the home team determine and dial up or down the intensity for you to follow suit. If you get tapped, you get tapped. It wasn’t the first time and I guarantee it won’t be the last. If you have built a good rapport and you get another roll with the same partner or even later in the same roll, then dial it up. It doesn’t hurt to let them know you can tap them, but you don’t need to rub it in their face. Get one and then play catch and release.

Here’s where it gets tricky, and some of you may disagree: higher ranking older or smaller folks, especially Black Belts. All higher ranks have a target on their backs from lower ranks. That is a good thing, it’s the natural order of Jiu-Jitsu life, and it keeps the higher ranks driving and pushing ahead. But when is enough, enough? Providing the Black Belt is a legit Black Belt from a legit Professor, they earned that. Show them some respect. Just because you can smash or tap them doesn’t mean you should. Again, if you want to get one under your belt and let ‘em know you have some ability, that’s fine, as long as you do it in a respectful and technical manner. After you’ve proved your point, enjoy your roll. Trust me, that higher rank knows you’re more athletic, stronger, bigger…whatever. Think about how they feel. Just because you can beat that Black Belt, doesn’t mean he isn’t more technical or know more than you. Chances are he is and does. Match their strength, match their intensity, then see if you can match their technique.