Infant in an Infinite World 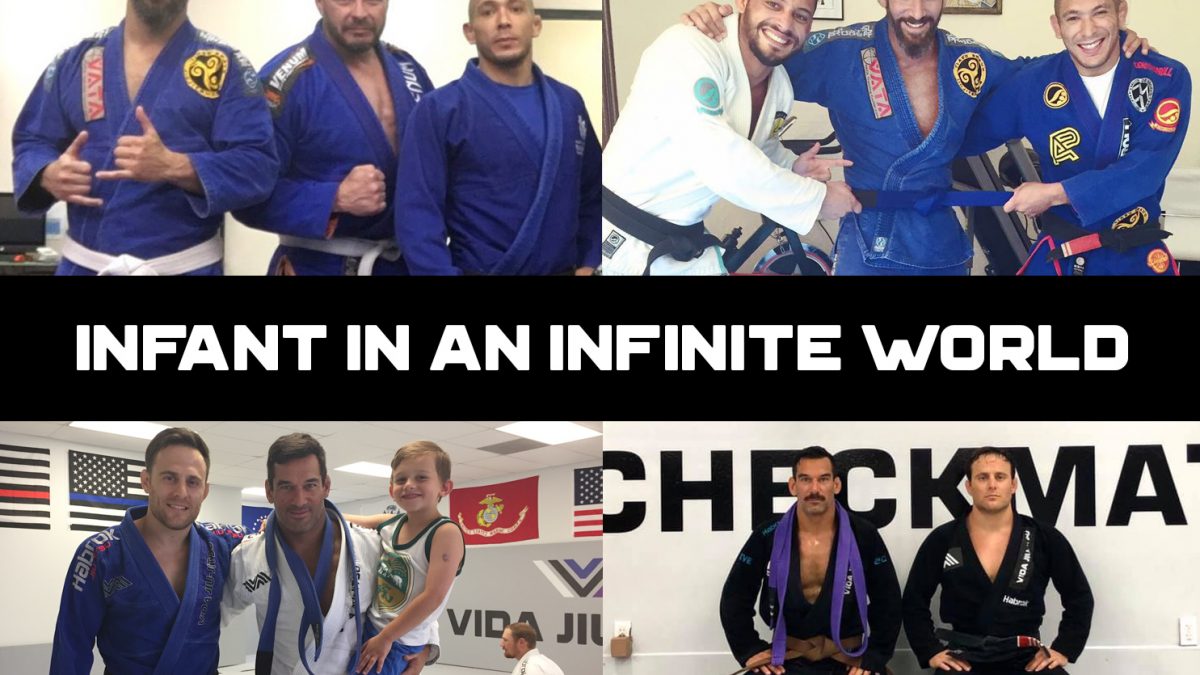 Not long ago I started training Brazilian Jiu-Jitsu. When I began my BJJ journey, I was already very active, physically fit and strong. I came from a Law Enforcement and government contracting background and, like most men, thought I could fight. Well, I learned pretty quickly that I was incorrect, horribly and woefully incorrect. As I’ve progressed, I feel like I’m starting to get it. I’m grasping some of the concepts and fundamentals of grappling, I’m able to control a dominant position against some of my training partners and even able to submit some of them. Just as I start to feel like I’m getting pretty good at this BJJ thing, I “roll” (BJJ’s term for sparring) with someone who is actually good and realize that, just like John Snow, I know nothing. I am a complete and utter infant in this martial art/sport and with every day that I train passes, I learn more and more how much further I have to go.

And…oh yea, two days ago I was hugely honored to be promoted to Brown belt by my Professor.

Now let me back up. Some of you are saying right now, “If this guy just started training, there’s no way he could’ve received his brown belt!!” Others of you are saying, “Brown belt! He’s close to his Black belt already. He must be an expert!”

I first started training Brazilian Jiu-Jitsu in 2006/07. I dabbled in it, mostly no gi, for a couple of years. Overseas deployments and less than desirable duty stations offered me little opportunity to train. I took about a 5-year hiatus where I barely trained at all, and then in 2015, while living in Al Ain, Abu Dhabi, UAE, I began training again under 3rd degree Black belt Tiago Bravo. Training under Tiago, we became quick friends. Tiago and his friends, who were also all Brazilian Black belts, welcomed me not just into the art of Jiu-Jitsu but the culture of it as well. This is when I developed my real love and addiction to this amazing lifestyle. I was promoted rather quickly to Blue belt by Tiago. Under his tutelage, I spent 1 year as a white belt. Now, keep in mind that, although sporadic, I had many years of grappling fundamentals beaten into me already, which led to me progressing a bit quicker than those with a completely fresh start. I spent almost another two years under him as a blue belt before my time in the UAE was up.

I spent 2 years as a blue belt and was promoted to purple belt by 3rd degree black belt, Professor Jeremy Umphries, head Professor of Vida Jiu-Jitsu in Mandeville, Louisiana. As a purple belt, you could say I trained more than most. I train regularly 6 days a week and many of those days I train twice a day. How do I maintain that training tempo? Well…I own Vida jiu-Jitsu and my job daily is to be there training under Professor Jeremy, coaching our students, and putting in the work, leading by example. Now, fast forward to 2020 and, one month short of 2 years as a purple belt, I was promoted to brown belt.

So there you have it. Over a decade of training on and off and 5 years of training virtually full time as well as competing in the International Brazilian Jiu-Jitsu Federation and, yes, I am still an infant in this art. This very fact is what draws me so fiercely into it, what pulls me into it like a drug. I can’t get enough, and just when I think I have, I see a new submission or move and it sucks me back in.

I have always been lucky in that I am athletic and naturally talented at most things. I have been able to get pretty good at a lot of cool things rather quickly due to this—rock climbing, mountain bike racing, motocross and enduro racing, skydiving, auto and rally racing to name a few—but this. . . this is something different. In Jiu-Jitsu, I get my ass kicked every day. I train hard, and learn, and study, yet every day I get my ass handed to me. It’s not that I’m not improving. I am. It’s that my training partners are improving as well, and my Professor is sooooo many levels above me, it’s ridiculous.

In the words of Buzz Lightyear, “To infinity and beyond.” That is Brazilian Jiu-Jitsu. It is never-ending. You are always growing and progressing, regardless of age. I have never been a part of a more difficult and soul crushing thing to master and I absolutely love it.